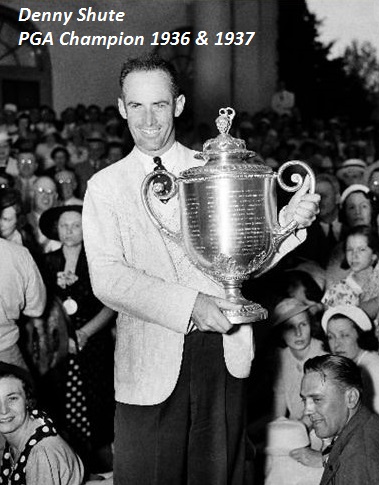 “DID YOU KNOW”
There was threat of a players strike at the 1939 PGA Championship!

In the second week of July the 1939 PGA Championship was played at the Pomonok Country Club, which was in the Queens borough of New York on Long Island. The tournament was at Pomonok because it was just two miles from where the World’s Fair was being held that summer.

Two weeks before the championship former Llanerch Country Club professional Denny Shute, was informed by the PGA that he was not eligible for the tournament because he had been late paying his $25 dues. The deadline was May 20 and Shute’s check had arrived two days late. When news about Shute became known, some of his fellow tournament professionals began voicing threats not to play. Shute, who had won the PGA Championship in 1936 and 1937, appealed the ruling.

When the professionals arrived at Pomonok for the tournament, Shute was informed that his appeal had been denied. The PGA officers and District Vice Presidents, which made up an 11-man executive committee, had voted 6 to 5 against Shute playing in the tournament. As a Ryder Cup Team member and former PGA champion, he had been exempt from local qualifying. 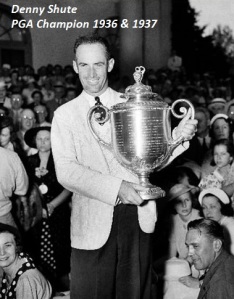 When the other professionals entered in the tournament heard the results of the vote, 51 prominent tournament players signed a petition stating that they would not play unless Shute’s entry was accepted. A Pomonok member, Corky O’Keefe, who had put up $15,000 to sponsor the tournament, threatened a lawsuit against the PGA and Pomonok, stating there would not be a tournament unless Shute was playing.  More meetings of the PGA executive committee were held. Philadelphia CC professional Ed Dudley, who was the PGA Tour tournament chairman and a national vice president, was in favor of Shute playing.

36-hole qualifying began with the issue unresolved. There were 120 competing for the 64-man match play ladder. Shute teed off in a pairing with Walter Hagen. He was not issued a score card. When Hagen learned that, he sent someone back to the clubhouse for a scorecard.

During the second day of qualifying, Tom Walsh secretary of the PGA, approached Shute after nine holes and offered him a check for $300 to withdraw. He said Shute could consider it an exhibition fee. Shute refused the offer and went on to post a 143 and qualify comfortably.

The committee had voted again and this time the vote was 8 to 3 against Shute. George Jacobus, president of the PGA, and Walsh emerged from the clubhouse. Walsh announced that Shute was out of the tournament, but Jacobus said that he was president and was overruling the committee. Shute was in.

3 thoughts on “There was threat of a players strike at the 1939 PGA Championship!”