“DID YOU KNOW”
When the PGA was founded in 1916 there were only seven PGA Sections for the entire USA!

When the PGA of America was founded on April 10, 1916 there were only seven PGA Sections, which covered the entire United States. Pennsylvania and West Virginia along with the states south of Pennsylvania down along the Atlantic coast to the Florida border were in the Southeastern Section. The states of New York and New Jersey made up the Metropolitan Section. The six New England states comprised a New England Section. The other four Sections covered the rest of the United States.

Due to these geographical challenges most PGA Sections did not have a Section Championship. Attending meetings was difficult unless you were near a sizable city.

When the PGA was being created Rodman Wanamaker of the Wanamaker’s Department Store, had promised to fund the prize money for a championship and with that he dictated the format to be match play. The PGA’s first championship was scheduled to be held at Siwanoy Country Club in Bronxville, New York.

The PGA decided that 32 PGA members would make up the match play ladder, with Sectional qualifying to determine the starting field. Each PGA Section was allotted spots based on the number of PGA members in its Section. The Met Section had 12 spots and the SE Section had 5. Walter Hagen made the trip from Rochester to Innwood CC on the south shore of Long Island and won the Met’s last spot in a driving rainstorm. The professionals from other PGA Sections had even greater problems with distances to travel.

The Southeastern Section held its qualifying rounds at the Wilmington Country Club in Delaware on the second Wednesday of September. The course is now the municipal Ed Oliver Golf Club. No one was there from Atlanta. Charlotte was the farthest south that anyone came from. Whitemarsh Valley CC’s Jim Barnes and Jock Hutchison, the professional at the Allegheny CC in Pittsburgh, tied for medalist honors at 147. The next two spots went to CC of York professional Emmett French, and host professional Wilfrid Reid with 149s. Philadelphia CC’s Jim Thomson and Philmont CC’s Charlie Hoffner tied for the last spot at 151, which called for an 18-hole playoff. The next day Thomson won the last spot from Hoffner while Barnes and Hutchison were in a 9-hole playoff for the medalist prize, which Hutchison won by one stroke. There was $350 in prize money. 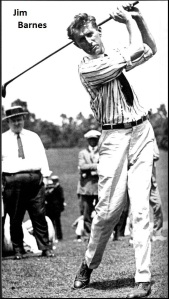 In the second week of October the successful qualifiers were at Siwanoy for the first PGA Championship. There were only three players from west of the Mississippi River; one from Kansas City, one from Sioux City, Iowa and one from California. Wanamaker paid the travel expenses for all of the qualifiers. All rounds were scheduled for 36 holes. Barnes and Hutchison each won four matches and met in the final. All even through 35 holes, they came to the last green, each facing five-foot putts for the title. After a measurement it was determined that Hutchison was away. Hutchison missed his putt and Barnes holed his. First prize was $500 and a diamond medal. Second prize was $250 and a gold medal.

The PGA members didn’t like that process either. At the PGA’s national meeting in July, which was held during the week of the US Open, a motion was made for each state to be a PGA Section. That motion didn’t pass but the message was heard. A committee was formed to study the problem. The committee came up with a plan to divide the original 7 PGA Sections into 24 Sections. On December 2, 1921 one of the new Sections was the Philadelphia PGA, the only PGA Section named for a city. There are now 41 PGA Sections.

One thought on “When the PGA was founded in 1916 there were only seven PGA Sections for the entire USA!”