“DID YOU KNOW”
Gene Sarazen left Miami on an exhibition tour two days before the first Masters Tournament!

Two days later Bobby Jones and his invited guests teed off at Augusta National in the first Masters Tournament. Sarazen was invited but he thought it was a land promotion that he didn’t need to help the “Emperor” publicize. Sarazen said if Jones had considered taking part in helping him promote golf events at the Miami Biltmore he would have returned the favor by competing at Augusta. 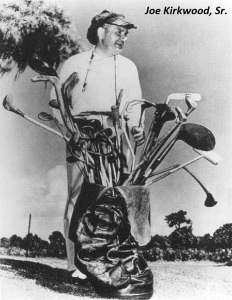 Kirkwood was the perfect partner for a golf exhibition. Kirkwood was the leading golf trick shot artist in the world. Kirkwood grew up in Australia. As a young boy he worked on a sheep ranch that had a three-hole golf course, where he learned to play. While tending the sheep he would pass the time attempting trick shots. During World War I he entertained the Australian soldiers with his various shots. He could do more than hit unusual shots. At age 23 he won the Australia Open, New Zealand Open and New Zealand PGA, all in 1920. The next year he left the South Pacific for the United States. He played his way across the country arriving in Pinehurst in April for the North and South Open. One round after having been paired with Walter Hagen, he was asked to show off his array of trick shots. When he finished, Jimmy Walker, the mayor of New York, passed a hat to collect tips for Kirkwood. When Hagen saw how much money was in the hat he could see someone he should team up with for exhibitions. It was a partnership that would last for the rest of their lives. On occasion like 1934, Kirkwood would also team up with Sarazen. In 1923 Kirkwood moved to the states. He purchased a home in Glenside, a suburb of Philadelphia, and joined Cedarbrook Country Club. For many years he kept a home in Glenside, no matter what club he might be representing.

The Sarazen/Kirkwood tour would last almost one year and cover 100,000 miles. First they visited South America returning to the states in time for the U.S. Open at Merion in June. Then they were off to the British Open and a tour of Europe. In late July they were back in the states for the PGA Championship in Buffalo, where Sarazen was the defending champion. After that, the two pros toured Canada and then they headed for the Far East where they visited eight countries that included China, Japan and Australia.

By 1935 Sarazen could see that the Masters was more than a land promotion, so he was in the starting field. In the final round he holed a 230-yard fairway wood on the 15th hole for a double-eagle that allowed him to tie Craig Wood for the title. The next day Sarazen defeated Wood in a 36-hole playoff.