“DID YOU KNOW”
Once Upon a Time the USGA Let the Air Out of the Golf Ball!

Ever since 1902 when Laurie Aucterlonie became the first to win a U.S. Open with four rounds in the 70s the USGA has been concerned with the distance a well struck golf ball can travel. Aucterlonie had won the tournament playing the new Haskel wound rubber golf ball which was much longer than the gutta percha ball. Until 1920 a golf ball could be any size and weight, but that year the USGA announced that the golf ball could be no less than 1.62 inches in diameter and not more than 1.62 ounces in weight.

In spite of the standardization of the ball the manufacturers continued to find ways to make a golf ball go farther. In 1924 the USGA invited some good players like the U.S. Amateur champion Max Marston to test various golf ball designs at Jekyll Island, Georgia. (Jekyll Island was also where secret meetings were held in 1910 that created the Federal Reserve System.)

It took seven years but the USGA was ready with mandatory changes in the golf ball for 1931. The new regulations called for a larger and lighter ball. The golf ball now had to be at least 1.68 inches in diameter and no more than 1.55 ounces. 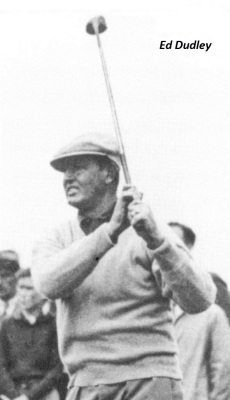 Ed Dudley, who was in his third year as the professional at the Concord Country Club must have liked the new ball. He had a great year, winning the Los Angeles Open and the Western Open along with having the lowest scoring average on the PGA Tour. The ladies liked it because of being lighter it sat up better on the turf which made it easier to play with fairway woods but most golfers didn’t like the ball. The lighter ball was difficult to control in the wind. Also at times the ball would not stay in place on the greens when it was windy. Some frustrated golfers referred to it as the “Balloon Ball”.

On September 15 of that same year the USGA pulled the plug on those ball specifications. New standards were put in place. The 1.68 inch size stayed but the ball could now weigh up to 1.62 ounces. The golf ball manufacturers are still required to go by those regulations today.