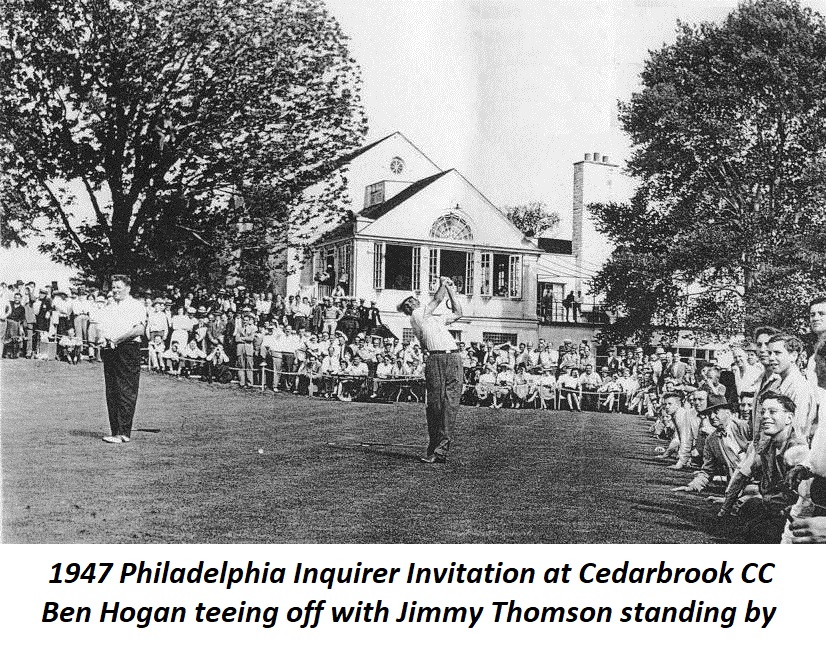 “DID YOU KNOW”
A bottle of red wine brought Bobby Locke to the 1947 Philadelphia Inquirer Invitation!

Having won the 1946 British Open, Sam Snead was invited to South Africa in early 1947 to play a series of exhibitions with their leading golfer, Bobby Locke. Locke had finished tied second at that 1946 British Open. Snead was guaranteed a percentage of the gate receipts or $10,000, whichever was larger, along with his expenses.  During the time that Snead was away he would have only collected $17,250, if he had won every tournament. During February and March, Snead and Locke met up twenty times, with Locke, coming out ahead fifteen times to three for Snead, even though Snead averaged close to 70 strokes per round. Two were tied.

With that, Snead encouraged Locke to give the US PGA Tour a try. On April 1 Locke and Snead flew into New York in route to Augusta, Georgia for the Masters Tournament. From New York they boarded a train to Columbia, South Carolina and then were driven to Augusta. In meeting up with Snead at Augusta, his agent Fred Corcoran said “I see you kicked a field goal.”

On his first venture to the states Locke had little time to prepare for a tournament, which began on April 3. He was able to get in one practice round. Locke tied for 14th. Snead was farther down, tied for 22nd, one stroke out of the money. The winner was Jimmy Demaret.

With no more tournaments on the PGA Tour until the second week of May, Locke played a series of exhibitions in the southeastern states. In his second start in the USA Locke won the Houston Open by five strokes. Next it was the Colonial Invitational in Fort Worth where Hershey CC’s professional; Ben Hogan, won and Locke tied for third.

From there the tour moved to Philadelphia for the Inquirer’s tournament at Cedarbrook CC, just north of the city at that time. After a rainout on Thursday 36 holes were scheduled for Sunday. On Sunday nine thousand spectators turned out in a misty rain and wind for the final rounds. Locke put together a pair of 70s to overcome a five stroke lead by Hogan and won by four strokes. Philmont CC’s professional Matt Kowal and Lloyd Mangrum tied for second. Hogan ended up in fourth place.

Locke won again the following week in Boston. After that he finished third at the US Open and then won three more times. When 1947 came to a close Locke was second to Demaret on the 1947 money list with $24,327 to Demaret’s $26,536. Demaret had played in 29 tournaments versus 16 for Locke. They both won six times.

Playing a limited schedule Locke won four more times in 1948 and 1949. In 1949 Locke was banned from the PGA Tour by the PGA of America for not appearing at tournaments and exhibitions when he had committed. Locke chose not to defend his Canadian Open title when the sponsor wouldn’t give him a $1,000 appearance fee. He withdrew from a tournament after 36 holes, saying he had to leave for the British Open which was still 16 days away.

In 1951 the PGA ban was lifted but Locke only returned to the states on a few occasions. During his career he finished third or better in half the tournaments he entered on the US PGA Tour.

Locke had to be one of the twenty best golfers of all time, winning 4 British Opens and a total of 85 professional tournaments world-wide.

One thought on “A bottle of red wine brought Bobby Locke to the 1947 Philadelphia Inquirer Invitation!”