“DID YOU KNOW”
George Fazio’s first foray into golf architecture was at Cobbs Creek Golf Club in 1955!

George Fazio, winner of the Philadelphia Open five times, was one of the best golfers to come out of Philadelphia. Fazio learned to play golf as a caddy at Plymouth Country Club in Norristown. A playing pro is what he wanted to be, but in his time only a few could make a living just playing tournament golf.

Like most golf professionals in the 1930s, he started out as an assistant pro. In 1940 he was the head pro at Glendale GC in Havertown, but the next year he was at Cedarbrook CC as the playing pro so he could enter more tournaments. He spent 1946 and 1947 as the pro at Hillcrest CC in Los Angeles, only to leave to play the PGA Tour full time.  Then he was in Maryland as Woodmont CC’s professional in 1950, but even that year he was 20th on the PGA Tour money list. Being a club professional was not what he wanted in life.

For a while he had a scrap iron business, and through the generosity of William Clay Ford he owned a Ford automobile dealership in Conshohocken. He leased and operated semiprivate golf courses in the Philadelphia suburbs; Flourtown CC and Langhorne CC. Along the way he won the 1946 Canadian Open and tied for first at the 1950 US Open, only to lose the playoff.

In December 1954 Fazio was awarded a one-year $12,000 contract by the Fairmount Park Commission to make the city of Philadelphia’s five public golf courses profitable. The five courses had experienced a combined loss of $57,000 for 1954. First he had the tees at three courses regrassed with the more durable U-3 Bermuda grass. Then he negotiated the hosting of the Daily News Open, a PGA Tour tournament, at the jewel of the city’s courses, Cobbs Creek GC. With Cobbs Creek hosting the PGA Tour, Fazio knew some changes were needed. He relocated the 18th green and redesigned the 17th hole. Along with that, he added 500 yards to the course. The tournament was held two years, 1955 and 1956.

In 1960 he was asked to assist with the design of Atlantis CC in Ocean County, NJ. He created a routing for the course. Because he did not do a total design of the course he never claimed it, but Atlantis still advertises it as a George Fazio design. 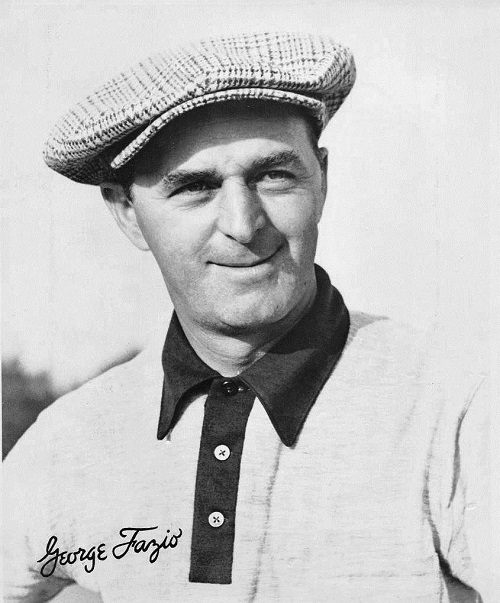 That year Fazio heard that Bob Hays, the University of Pennsylvania golf coach, was planning to build a golf course near Phoenixville. He called Hays to say he was going to build his golf course. Hays said he already had someone lined up to do that, but Fazio insisted he was going to be the one. Hayes agreed to have lunch with Fazio. Fazio showed up at the lunch with four framed designs for the course. He had hired an airplane with a photographer to take pictures of the property. Fazio had designed 18 holes by sketching on tracing paper over the photographs. With that, Hays agreed that Fazio to be the architect of his Kimberton GC.

At that time there were few construction companies that built golf courses. Bill Elliott, a friend of Fazio, and a member of both Pine Valley GC and St. Davids GC, put up the money for the equipment and labor to build the course. Fazio completed the whole project, from moving the dirt, to drainage, irrigation and grass.

After that Fazio and Elliott built Squires GC on their own, which they sold to some men as it was nearing completion. They then built Moselem Springs GC for Hawley Quier, who owned the Reading Eagle newspaper. Next it was Waynesborough CC, which opened in the fall of 1965. Elliott’s vision was a golf course with a hotel catering to corporate outings and meetings during the week, with weekend golf memberships. Before they could finish the project a group who wanted to have a private club purchased the project from Fazio and Elliott, while paying them to complete the course.

In 1968 the USGA held the US Women’s Open at Moselem Springs. Within a few days Fazio and Elliott were inundated with offers to build golf courses from the Caribbean to Hawaii.