“DID YOU KNOW”
A young Ben Hogan finished second to Byron Nelson on and off the golf course!

As most golfers know, Ben Hogan and Byron Nelson were born in 1912 and grew up caddying at the Glen Garden Golf Club in Ft. Worth, Texas. Nelson’s golf game may have developed sooner, due to Hogan beginning with left-handed clubs.

Nelson always seemed to have a bit of an edge. One year, in the club’s annual caddy tournament Hogan and Nelson tied for first place. There had been no mention of a playoff being part of the tournament, but the committee called for a playoff which Nelson won. As a result of that Nelson was asked to work in the golf shop and was able to play the course more often.

They both turned pro at an early age. Nelson had success almost right away, winning money on the PGA Tour. Nelson began winning tournaments while Hogan was struggling to win enough money to even cover his expenses.

In late 1936 Nelson and Hogan both applied for the head professional position at Reading Country Club in Pennsylvania. RCC hired Nelson. A few months later Nelson won the Masters and then headed north to his new job at RCC. Hogan wasn’t invited to the 1937 Masters. At times Hogan was working odd jobs in the oil fields and gambling houses to enter some more tournaments. 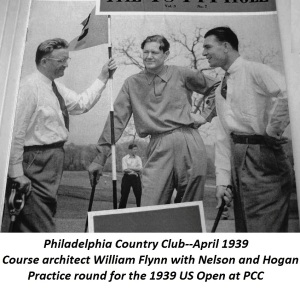 In the spring of 1938 Hogan landed a job as the teaching and playing professional at the Century Country Club in White Plains, New York. In the embedded photo, Hogan and Nelson, pictured with William Flynn, are at the Philadelphia Country Club the week after the 1939 Masters, playing a practice round for the upcoming US Open. Nelson was back at Reading CC and Hogan was on his way to White Plains.

In June Nelson finished 72 holes in the US Open at the Philadelphia Country Club tied for first with Craig Wood and Denny Shute. On Sunday there was an 18-hole playoff, which Nelson won after a second 18-hole playoff on Monday. Hogan finished 62nd.

(What follows was told to me by Henry Poe.) During the playoff Nelson told Wood and Shute that he was going to be the professional at the Inverness Club in Toledo in 1940. Nelson asked them if they knew of anyone who might be right for Reading CC. Wood recommended Henry Poe who was working for him at Winged Foot Golf Club.

Hogan had also applied at Inverness. Again he had finished second to Nelson. Nelson being Nelson said that the committee must have liked the way he tied his tie better than Ben.

Poe told me he really wasn’t interested in the Reading position. He loved working at Winged Foot for Wood, but he agreed to an interview. During his interview he was invited to stay for dinner and told he could have the same contract as Nelson. Poe signed on and stayed 27 years. He went on to be president of the Philadelphia PGA and the PGA of America.

In 1940 things began to turn around for Hogan. In March he won the North and South Open for his first individual title on the PGA Tour, but it was back to Century CC for a third year. Hogan won three more times that year and tied for fifth at the US Open.

In early 1941Henry Picard resigned as the professional at Hershey Country Club to buy a farm in Oklahoma. A great supporter of Hogan, Picard recommended him to Milton Hershey, who owned the club. Hogan was now a head professional. He won five times on the PGA Tour in 1941 and six in 1942. At the same time Nelson’s golf game was improving as well.

By late 1941 the United States was at war. Hogan enrolled in a flight school and learned how to fly. In 1942 he volunteered for the US Air Force and taught flying during the war. Nelson, who was turned down by the draft board due to a blood disorder, won even more often than before.

In 1945 Nelson won 11 straight tournaments and 19 in total. Late that summer Hogan was a civilian again. Before the year was over he had won 5 times. About the time that Hogan had figured out tournament golf, Nelson seemed to have tired of the tournament trail. After winning six times in 1946 Nelson retired in late July. It is too bad that the world of golf wasn’t able to witness two of the greatest golfers ever, competing against each other at the peak of their careers.

7 thoughts on “A young Ben Hogan finished second to Byron Nelson on and off the golf course!”