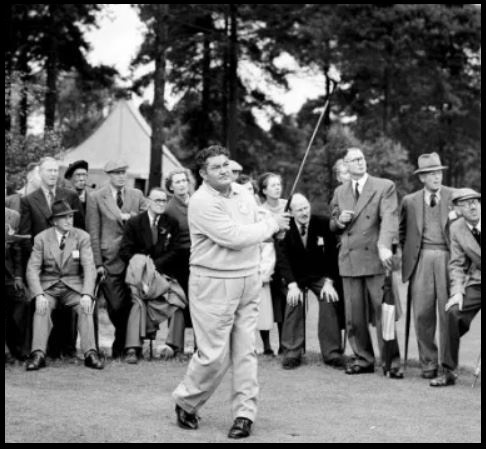 ‘DID YOU KNOW’
A Delaware Valley professional golfer was the military’s longest serving professional athlete!

It was January 1941. There was war in Europe and the United States was building up its army.  Ed “Porky” Oliver, a 25-year-old established tournament player with three victories on the PGA Tour, was on the West Coast playing the Winter Tour. In the second week of January he was competing in the Oakland Open when a messenger boy broke through the gallery and presented him with a telegram on the 10th tee. The telegram contained orders to report to his draft board for a physical. Oliver shook hands with his fellow competitors and withdrew from the tournament.  He drove across the country to his hometown of Wilmington, Delaware. Even though he was the professional at Hornell CC in New York his home address with the Draft Board was Wilmington. Oliver passed the physical but was given a “Hardship Deferral”, as he was the sole support of his family. His brother was making just $16 a week working in a factory.

Oliver then got in his car and drove back across the United States to play in the Crosby Pro-Am, where he was the defending champion and Bing Crosby’s partner. When Oliver arrived back in California he opened the trunk of his car and discovered his golf clubs were not there. While he had been home in Wilmington his father had taken the clubs out of the car and put them in the garage, thinking that his son would not be playing golf for awhile. Using a borrowed set of clubs Oliver led the two-day Crosby tournament the first day with a 66 but did not win. (For another piece of trivia Ray Watson, a law student at Stanford and later the father of Tom Watson, won the pro-am, helping his partner 15 strokes to a twenty under par 124.)

A week later Oliver won the Western Open at Phoenix and one month after that his deferral was withdrawn. In late February while playing in the St. Petersburg Open he received a letter from the Draft Board stating that his deferment had been revoked. He was to report for induction into the U.S. Army on Monday. Somehow thinking he had clearance to play in the International Four-Ball that next week Oliver headed for Miami.

On Sunday Oliver and his partner Clayton Heafner won their first round match in the Four-Ball, but then he received a telephone call from his brother saying that he had to report for induction that next morning.  Heafner was given a substitute partner. Oliver hopped on a plane to Wilmington and at 7:30 a.m. Monday morning he was inducted into the U.S. Army at Newark, New Jersey. He was the first big name professional golfer drafted into the U.S. Military.

You can see from the attached letter that Oliver thought he would only be in the Army for one year, but that was before Pearl Harbor. One has to wonder why Oliver had to spend four years and eight months in military service during World War II without serving overseas or reenlisting. That was much more than any professional athlete. 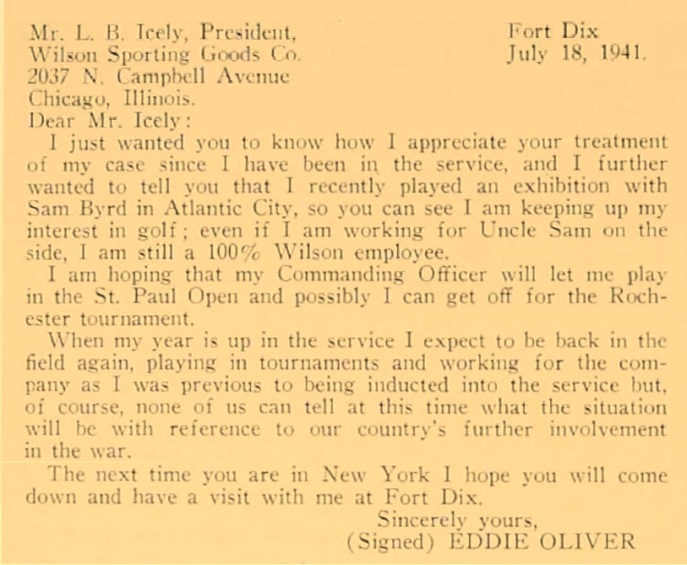