“DID YOU KNOW”
An amateur could have, maybe should have, won the 1939 US Open!

The 1939 United States Open Championship was played at the Philadelphia Country Club’s Spring Mill Course, which was near Gladwyne, a few miles west of its main clubhouse on City Line Avenue. The golf course, usually a par 71 was played at a par of 69. Two par five holes, the eighth and twelfth, were played from forward tees as par fours. 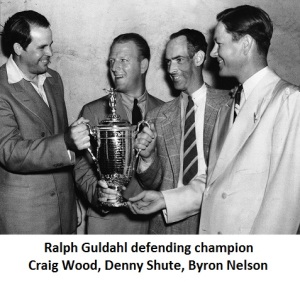 Most golfers, even 80 years later, have heard the stories of how Sam Snead appeared to be a sure winner when he teed off on the 71st hole with a two stroke lead, only to make a bogie 5 on that hole and a triple bogie 8 on the last hole. When all the scores were posted he tied for 5th at 286. Playing right in front of Snead, Reading Country Club professional Byron Nelson posted a 68 for a total of 284, which made him the leader in the clubhouse. 25 minutes later Craig Wood reached the last green with two big shots. His birdie 4 gave him a 72 and he was in at 284. In those days there were no gallery ropes, so in order to spread out the spectators the leaders were not paired together. The players had been paired in twos, at five minute intervals for Saturday’s final 36 holes. Former Llanerch Country Club professional Denny Shute, who had teed off 55 minutes after Nelson, shot a 72 for another 284 and a three-way tie for the title.

Lost in all the commotion over Snead’s triple bogie on the last hole and then the three-way tie for first, was Marvin “Bud” Ward, an amateur from the state of Washington, who had begun the day in a tie for fourth. Ward’s tee time was earlier than any of the leaders and more than an hour before Denny Shute, who he was tied with. Not an unknown Ward had been a member of the 1938 Walker Cup Team. With nine holes to go, Ward was within one stroke of the leader, Sam Snead. On the short downhill par 3 eleventh hole, Ward was bunkered twice and made a double bogey 5, but he birdied the next hole to remain in contention. On the 200-yard thirteenth hole Ward played a solid 2-iron toward the right side of the green. With most of the marshals assisting the big names, a young lady was standing almost on the thirteenth green. Ward’s tee shot struck the lady ending up in a bunker, nearly unplayable. Two stokes later he was on the green and two putted for another double bogey. Ward made a birdie on the next to last hole and finished with a 285 total. He was the leader in the clubhouse, but not for long. Ward finished alone in fourth place, behind Nelson, Wood and Shute. There was scant mention of his misfortune in the newspapers. The outcome could have, and maybe should have been, entirely different.

Byron Nelson won the playoff that took two days and Bud Ward went on to win the US Amateur Championship later that year and again in 1941.