“DID YOU KNOW”
Ed Dougherty Delivered His Own Vietnam War Draft Notice and Wound Up on The PGA Tour!

After graduating from St. James Catholic High School Ed “Doc” Dougherty went to work at his local post office in Marcus Hook, Pennsylvania. One day while delivering the mail he had to deliver his own U.S. Army draft notice. Dougherty ended up in the Vietnam War launching mortars where he received a Purple Heart and earned two Bronze Stars for valor.

Dougherty was sent back to the states for duty at Fort Lewis, Washington. Having been a good high school pitcher, he volunteered for the baseball team. He was told baseball required too much time and as a Vietnam veteran he was needed for training soldiers who were headed overseas. The base also had a golf course, so Ed who had only played a couple of rounds of golf before, managed to figure out a way to play some golf. 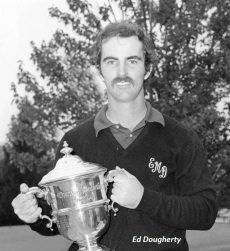 When Dougherty returned home as a civilian in 1969 a friend took him to Edgmont Country Club for a round of golf. Tiny Pedone, the golf professional and part owner, watched Ed hit a few golf balls and offered him a job running the practice range. A year later, through a Philadelphia connection, Ed landed a winter job at a golf course on St. Croix in the Virgin Islands working for golf professional Mike Reynolds. He was now able to work on his game 12 months a year. Under the tutelage of Reynolds, who had grown up playing golf at The Springhaven Club, Ed’s golf improved immensely.

In 1974 Dougherty became a PGA member and in March of 1975 he began playing the PGA Tour as a Monday qualifier. Most years he was able to earn enough money to stay exempt, but there were numerous interruptions due to elbow and shoulder injuries.

Although not showing any symptoms, Dougherty was diagnosed with Agent Orange Leukemia in 2015, which is related to his time served in the Vietnam War. Dougherty was inducted into the Philadelphia PGA Hall of Fame in 2012.